Due to logistical problems with the bands forthcoming French tour starting in November the last three UK tour dates have had to be postponed until next year. Camberley on Tuesday 8th November has been re scheduled to take place on Friday 12th May 2017. Epsom on 29th November has yet to be rescheduled and East Grinstead on Wednesday 30th November will now take place on Friday 21st April 2017. Apologies for any inconvenience this may have caused but it was proving impossible to fit the dates in with the travel demands of the French tour locations. Because there is a matinee at 2.00pm and evening show at 8.00pm at every location the guys are having to arrive the night before every show which on the occasions around the remaining UK dates were proving impractical. For those who were hoping to attend these dates the good news is theres something still to look forward too in the new year.

The show at Barking on Friday 7th October 2016 which had to be cancelled because of a fire at the Theatre has now been re scheduled to take place on Saturday 22nd April 2017. An extra ‘An Evening with’ show will then follow the next day Sunday 23rd April at The Mill at Sonning, Reading, Berkshire.

A new CD compilation ‘La Legend continue’ will be available soon from this site. Produced primarily for their forthcoming tour of France it will feature many of the Rubettes French hits as well as their international hits with some selected album tracks and some new bonus recordings you won’t have heard before. Complete with an 8 page booklet including  photos and biog. of new keyboard player Steve Innes Etherington.

2nd leg of the UK tour continues on 21st September at the Brindley in Runcorn. If you missed out on the 1st leg last April/May you won’t want to miss out this time around. I’m sure you’ve read the great reviews but they bare no comparison to actually being there to see it live on the night. There are no plans to repeat the show in the future so these last 20 dates may be your last chance to spend an ‘Evening With’ your guys. All tour dates are listed in the ‘On Tour’ pages.

The major tour of France announced earlier has now been confirmed with more dates added as follows :

Taking the guys well into 2017 their usual winter break will this time have be delayed somewhat. But hey that’s Rock n’Roll. 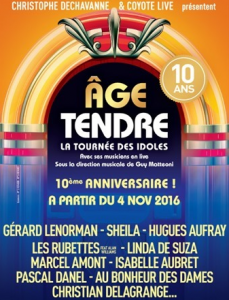 We are finally pleased to announce that having resolved all health and logistical problems that unfortunately affected some of the shows during the 1st part of our 2016 UK Theatre tour the 2nd half dates have now been confirmed as :

Some dates have been moved and some will hopefully be re scheduled in order that the rest of the shows can continue without any further disruption. Once again we apologies for any inconvenience caused but the actions taken, which were completely necessary, so as to ensure that the 2nd half of the tour was able to proceed without any further problems arising. We hope that those who have been affected will understand the reasons behind the changes and are able to attend an alternative venue.

The reactions from everyone who have seen the new acoustic show so far has been tremendous, look at : The Rubettes featuring Alan Williams chez vous

The guys can’t wait till September to do it all over again.

The U.K. tour starts next week and we can announce that there will be a completely new first half of the show. It will be all acoustic and the guys will be playing songs from Baskin and Copperfield, the Symbols and early Rubettes album tracks such ‘Kid Runaway’, ‘Beggar Man’ and ‘I’ll always love you’. Also there will be songs and stories about their musical influences and from their early days in the music business, how the songs came about and a few other musical surprises. They will then play all the U.K. hits in the second half of the show including ‘Little Darling’. The guys have been rehearsing hard so as to make everything perfect and are very excited about it. They hope you are all able to catch at least one of the shows and promise you an experience you’ll never forget. A new 16 page tour brochure will be available at the Venues as well as a new 2016 tour Tee shirt. Can’t wait! 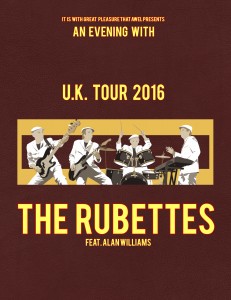 It’s certainly going to be a busy year. Following the last leg of their UK Theatre tour ‘AN EVENING WITH’ the guys will be headlining a French tour of major venues throughout France. Under the title of  ‘LA TOURNEE DES IDLES’ There will be around 40 dates. Venues will include Sports Halls, Concert Halls and Theatres of between three and five thousand capacity. Starting this November 2016 and continuing on until February 2017 with the possibility of even more dates being added. The Band will be appearing with other well know French Artists from the seventies performing a matinee and an evening show each day so plenty of seats for everyone but if you want to be at the front don’t wait too long to get your tickets.

Proposed dates as follows yet to be confirmed.

Happy New Year to all.

Since the 2016 UK Tour ‘AN EVENING WITH’ was announced there has been some changes to the dates originally announced. This being due to some other date conflicts at theatres and the probability of a major French tour later in the year. Most of the dates affected have been rescheduled . If you have tickets for any of the affected dates they will most likely be transferable to the new date. Please check with the theatre. We apologise for any inconvenience these changes may have caused which are mainly beyond our control.

Following their long awaited UK comeback on the Glitz, Blitz and 70’s Hitz tour this winter ‘An Evening With’ tour is now in the planning stages to follow early in 2016. Hoping to re establish themselves on the UK live scene after an absence of several years the guys will be appearing in ‘intimate’ Theatres throughout the UK with a totally new concept stage show in two halves where they plan to be on stage for about two hours. The first half will be dedicated to songs and stories associated with the guys before, leading up too and during the Rubettes rise to fame with a few, as yet, untold and often hilarious revelations which in themselves herald an evening not to be missed. The second half will be the band in full concert mode as always full of Hit’s and additionally some that they haven’t played for a long time never failing to revive all those wonderful memories from way back when.

Dates to be announced soon.